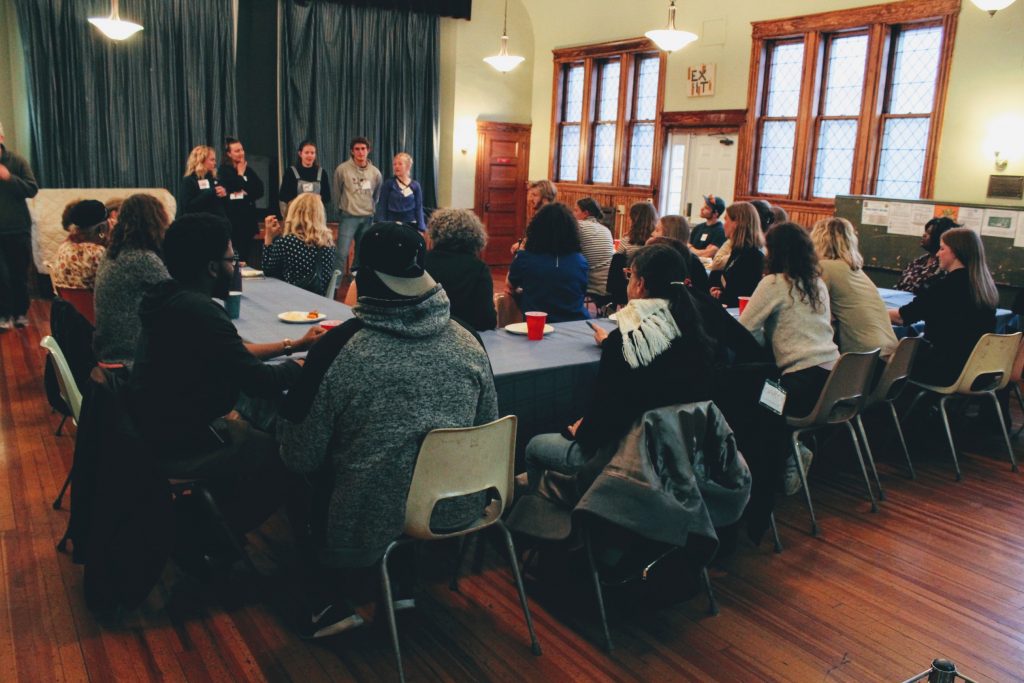 Launched in November of 2015, the HUUB is a new initiative at the First Unitarian Universalist Church of Essex County. First UU is a true urban ministry, located on Cleveland Street/aka Ben Jones Place, just steps from Main Street’s business district, the Orange train station, public schools, the public library, and city hall. In the same location the entire time, First UU is an anchor institution in the city, and has provided a space for like-minded people to meet and worship for generations. An anchor institution is a community based organization, “whose everyday activity strengthens the urban and social fabric of the community in which it resides.”

First UU’s history as an institution fighting for social justice and serving the community is long and varied, from founding social service programs to participating in civil rights struggles, demonstrations, and events. First UU partnered with the First Presbyterian Church of Orange as part of the Interfaith Hospitality Network (IHN) for the Homeless of Essex County. We provided dinner and other assistance when First Presbyterian hosted homeless families. Our Arts on Cleveland program provided one and a half hours of visual arts education and instruction each week for 15 gifted arts students, culminating in an art show and opening reception. We have always opened our doors and welcomed groups unable to find space elsewhere, such as Lanbi and the Laundry Workers Center, both immigrant rights and education organizations. First UU has hosted special events like Lanbi’s Concert for Haiti after the earthquake and the 50th Anniversary of the Fight to Desegregate Orange Schools in 2007.

Over the years, First UU and other anchor institutions have provided stability through the long series of urban policies that shifted investment away from Orange. These include urban renewal, deindustrialization, highway construction, and the suburbanization of the middle class. While some of Orange’s anchor institutions could not weather this storm of disinvestment, such as the First Presbyterian Church of Orange, Orange Memorial Hospital, and the YMCA of Essex & West Hudson, First UU survived these changes over three decades but as a direct result found itself with a dwindling membership. Faced with difficult decisions, the congregation identified three options: merge with a neighboring UU congregation, dissolve the church and use the remaining resources to support UU activities, or turn our faith outward and become a more relevant model of urban ministry. After an extensive and emotional process of self-reflection and consultation with other UU congregations, ministers, and non-UU colleagues, it was agreed that, after investing so much time, energy, and love into the church, simply closing the doors and walking away was not the direction the congregation wanted to go. The congregation was energized and inspired by Azimi & Baena-Tan’s observation that “not every organization realizes how vital they are to creating community, or what their role is in the bigger picture. These anchoring institutions might see themselves as humble businesses or community projects, but they create and maintain the fabric of community. To lose them chips away at urban society.” As an anchor institution in Orange, after more than a century in the community, it was not our time to leave: our neighbors were struggling and we had a role to play in helping the city move forward.

There is a growing need for faith and justice based organizations in our cities, a need First UU can meet as one of the few small, urban UU congregations in the region, and as an established anchor institution in Orange. Instead of leaving or dissolving, First UU chose to evolve, committing the church’s remaining energy and resources to developing a new urban ministry, which could serve as a vehicle to address the array of urban issues facing the diverse community around us.

The HUUB is a product of this history and the congregation’s current decisions. It is the mission of this program to turn the buildings and land we own, the Church’s most valuable assets, outward to be a welcoming resource for the people of Orange and an active site of community and collaboration founded on UU values. The HUUB is designed to be a community hub of activity with UU values at its core. Using Asset-Based Community Development (ABCD) theory and strategies, the HUUB will identify, mobilize, and support Orange’s existing assets to create a better city.